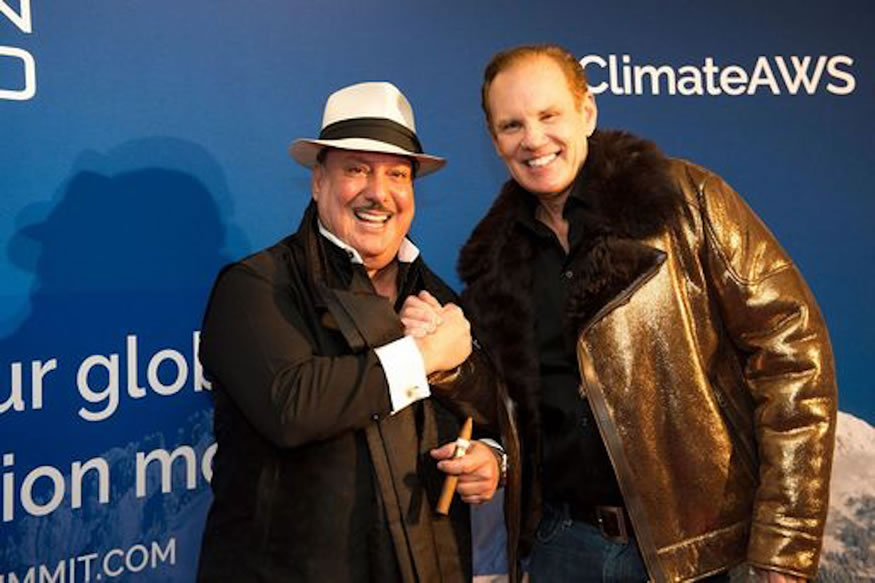 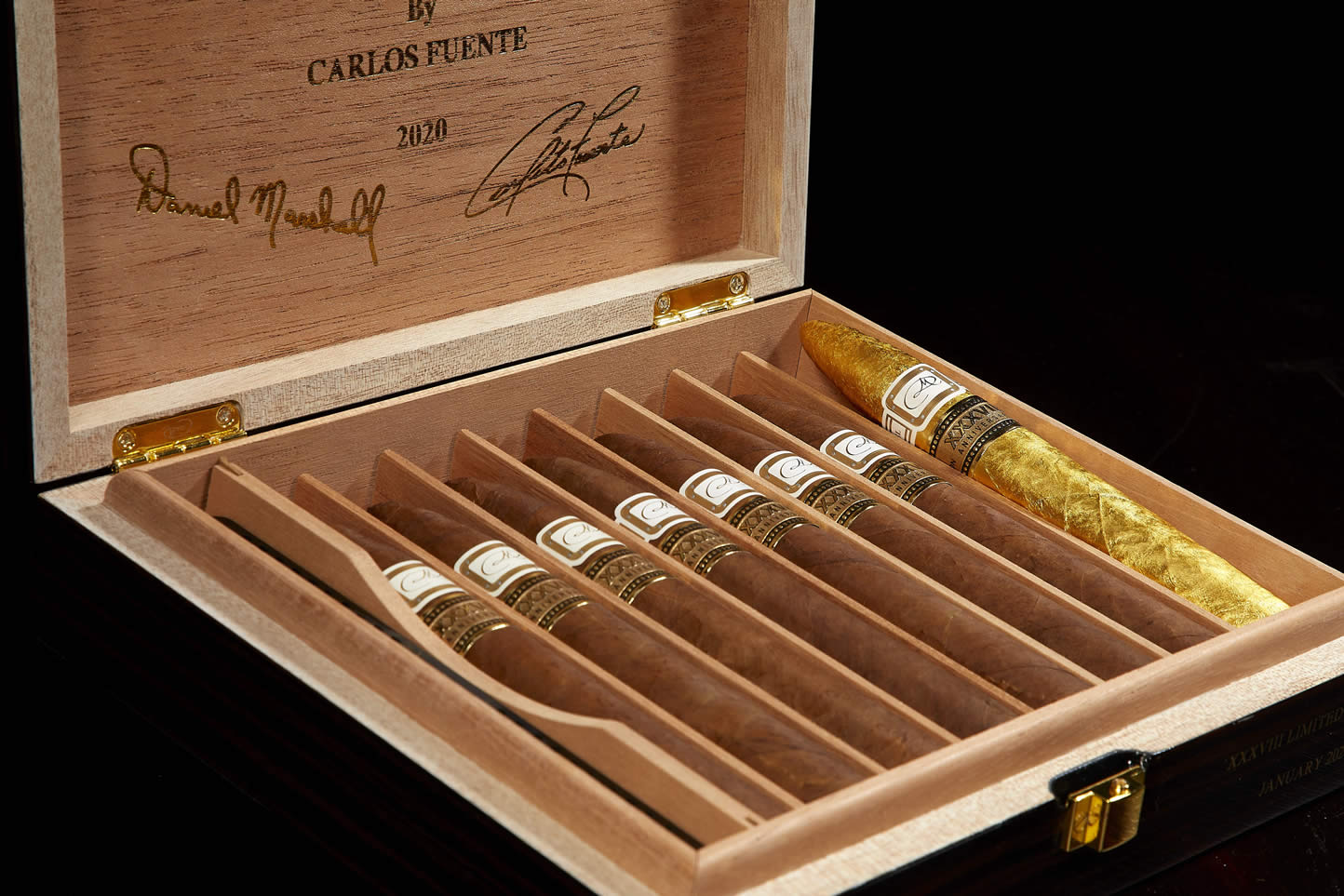 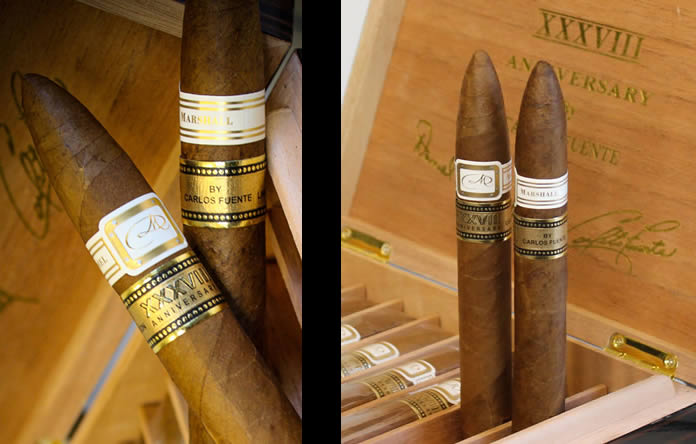 In speaking on their collaboration, Fuente told Marshall, “I want to do something for you very, very special. I am making a cigar for you, which I do for no one, to commemorate our long time friendship and my highest respect and admiration for you and your story. It’s an honor to be able to participate with you on this special anniversary. I poured my heart in to every detail, hoping to make you proud. I will give you my best.” 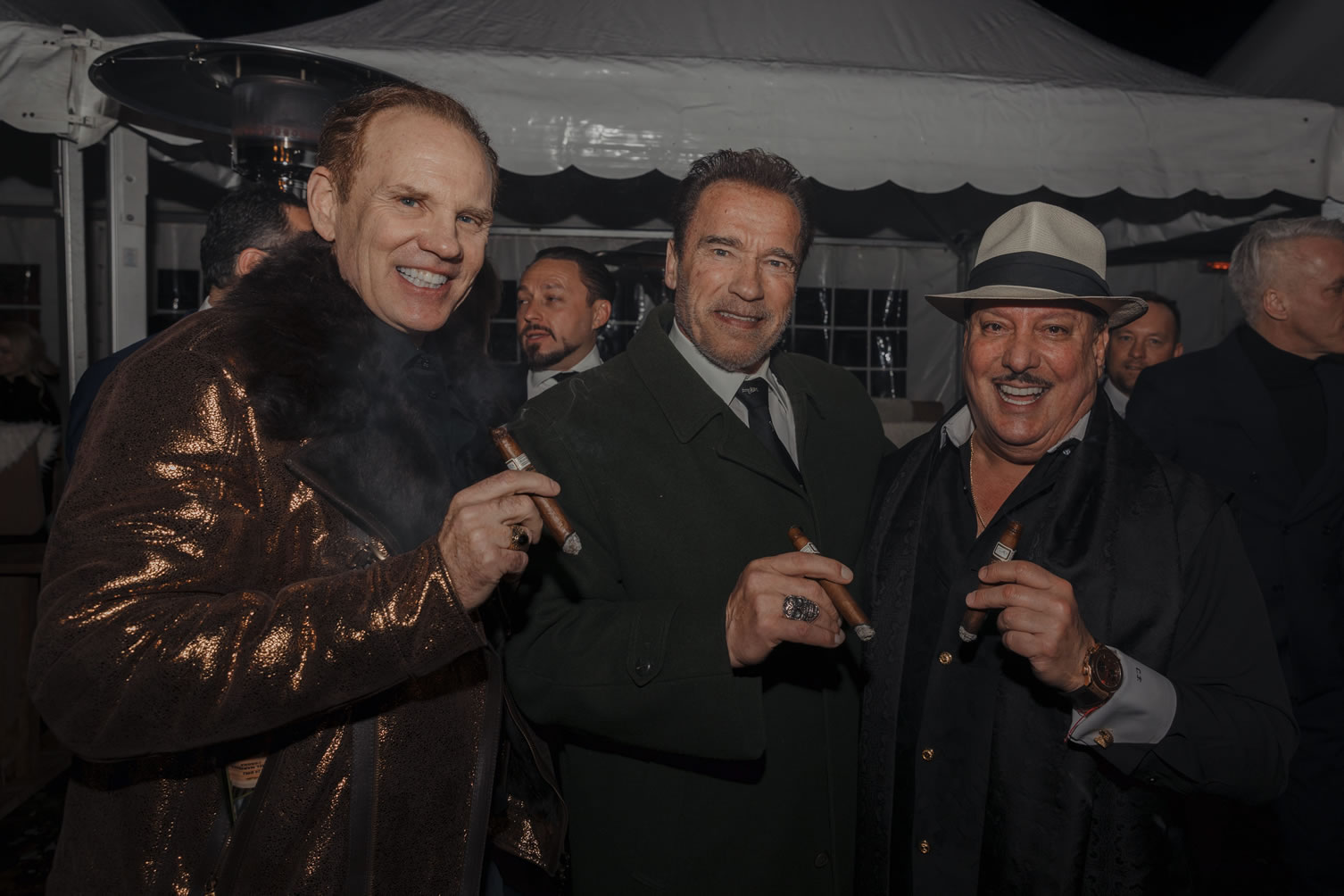 Fuente and Marshall – two creative minds from the world of quality, luxury and cigars– worked three years on this extremely limited edition cigar. On January 23, 2020, following dinner and alive auction, guests made their way to the Daniel Marshall Cigar Lounge and Terrace to enjoy the DM XXXVIII Cigar for the very first time. With stunning 360-degree panoramic views, the massive, heated and tented Terrace at the Kitzbuhel Country Club, created the perfect setting for the “Modern Day Campfire.” 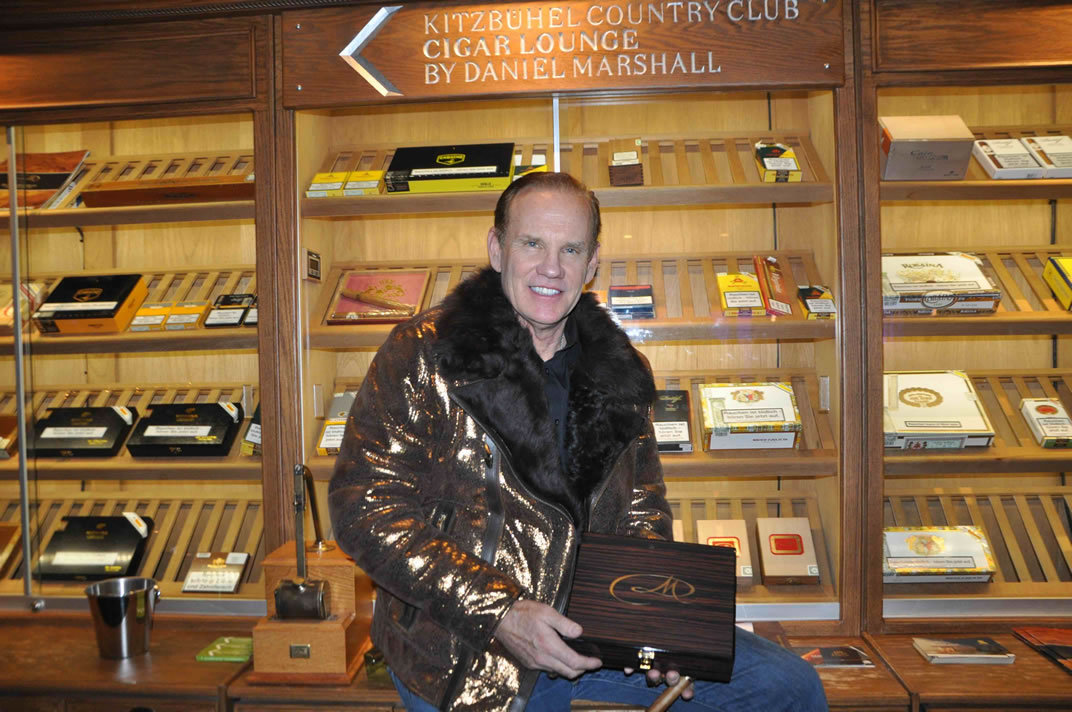 The “Daniel Marshall by Carlos Fuente XXXVIII Anniversary Cigar, Limited Edition 2020” will be made available to collectors at select world-wide Daniel Marshall Campfire events, and allocated to 38 of the world’s top tobacconists and iconic hotels, representing one location for every year Marshall has been a part of the cigar world. The rare DM-Fuente Cigar can be collected from Japan, Hong Kong, South Africa, London, France, Belgium, Germany, Dubai, Qatar and for a limited time in the United States. Marshall will be hosting his signature “Modern Day Campfire” events at each of the 38 international destinations. 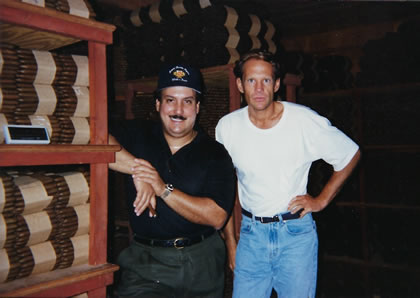 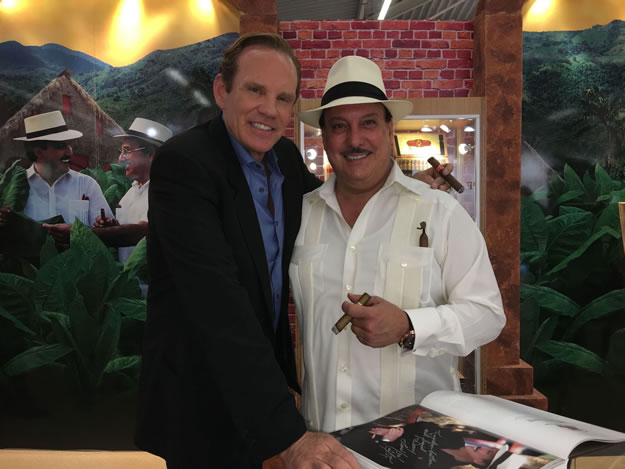 This unprecedented alliance between Marshall and Fuente is an homage to friendship. Daniel and Carlos have spent their entire adult lives in the cigar world. “Carlos and I grew up together from boys to men sharing similar values, commitment to quality and an unrelenting quest for the best.What joins us together, the golden thread that runs through our veins and drives us to live our dreams, is a commitment to create in all we do a richness of character and generosity of spirit” Marshall expressed.

Marshall and Fuente’s friendship has flourished since their meeting in 1982. They both toured the United States with Marvin Shanken’s Cigar Aficionado Magazine, exhibiting at the

Longevity is a common theme between Marshall and Fuente as 2020 marks important milestones for both men. It is the 38th year since Daniel Marshall founded his first workshop in California where he began creating luxury humidors for Alfred Dunhill of London. 2020 commemorates the 25thanniversary of the first DM Cigar and the iconic Fuente Fuente OpusX Cigar, as well as the 108th anniversary of Arturo Fuente. 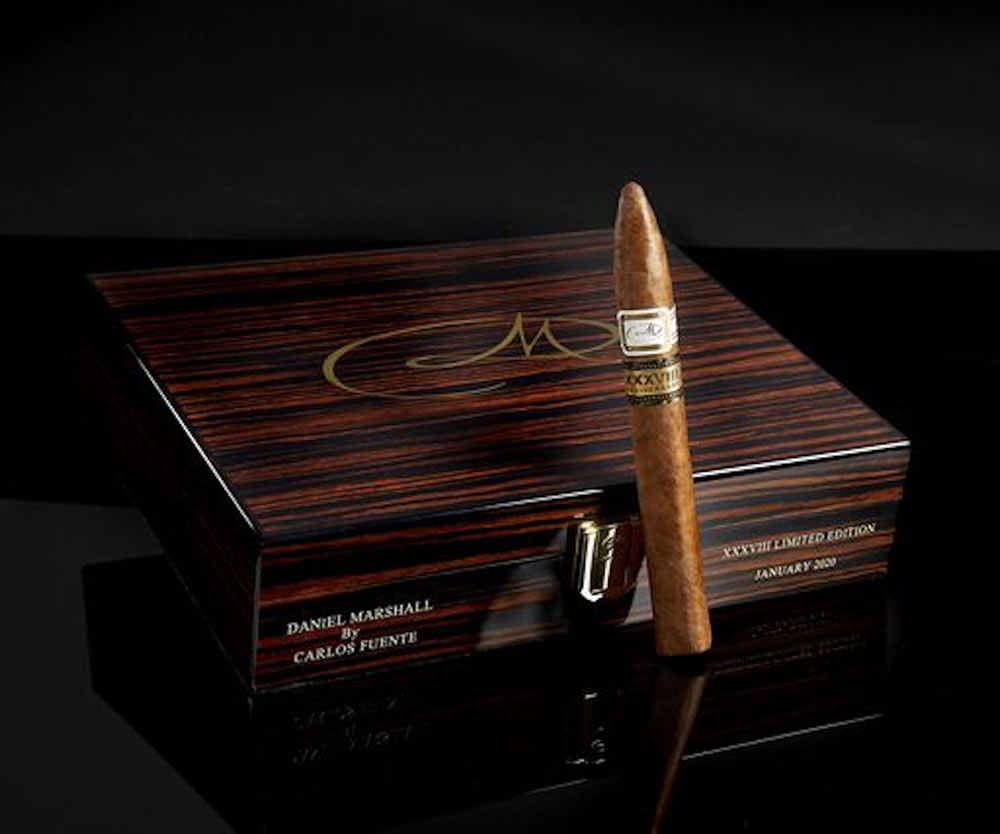 Designed by Marshall and Fuente, each humidor is individually numbered. The distinctive rounded black edging and Marshall’s trademark “1000 coat finish” accentuate the beauty of the rare woods. Marshall chose macassar ebony as this was the wood he used to create his very first humidor for Dunhill. The DM humidor will hold 8 of the DM XXXVIII Anniversary Cigars and includes a removable Spanish cedar tray that can increase the capacity to 16 cigars. The collectible humidors are embellished with a golden DM motif on the top as well as on the front in gold – “Daniel Marshall by Carlos Fuente – XXXVIII Limited Edition January 2020.” Each cigar is crafted by one artisan in the Chateau de la Fuente and is blended with tobaccos up to 12 years old and then aged a minimum of one year after rolling in special cedar vaults. 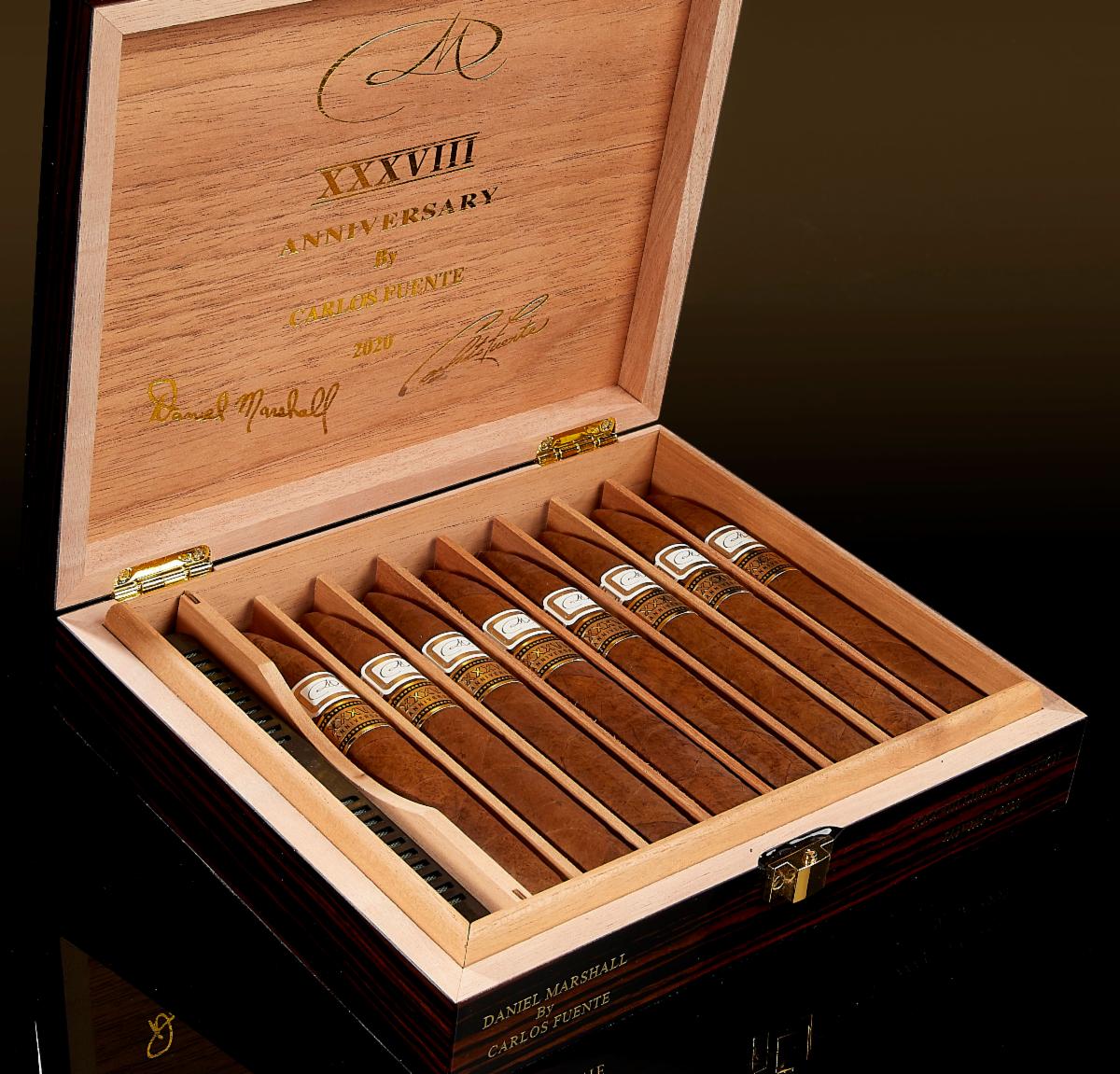 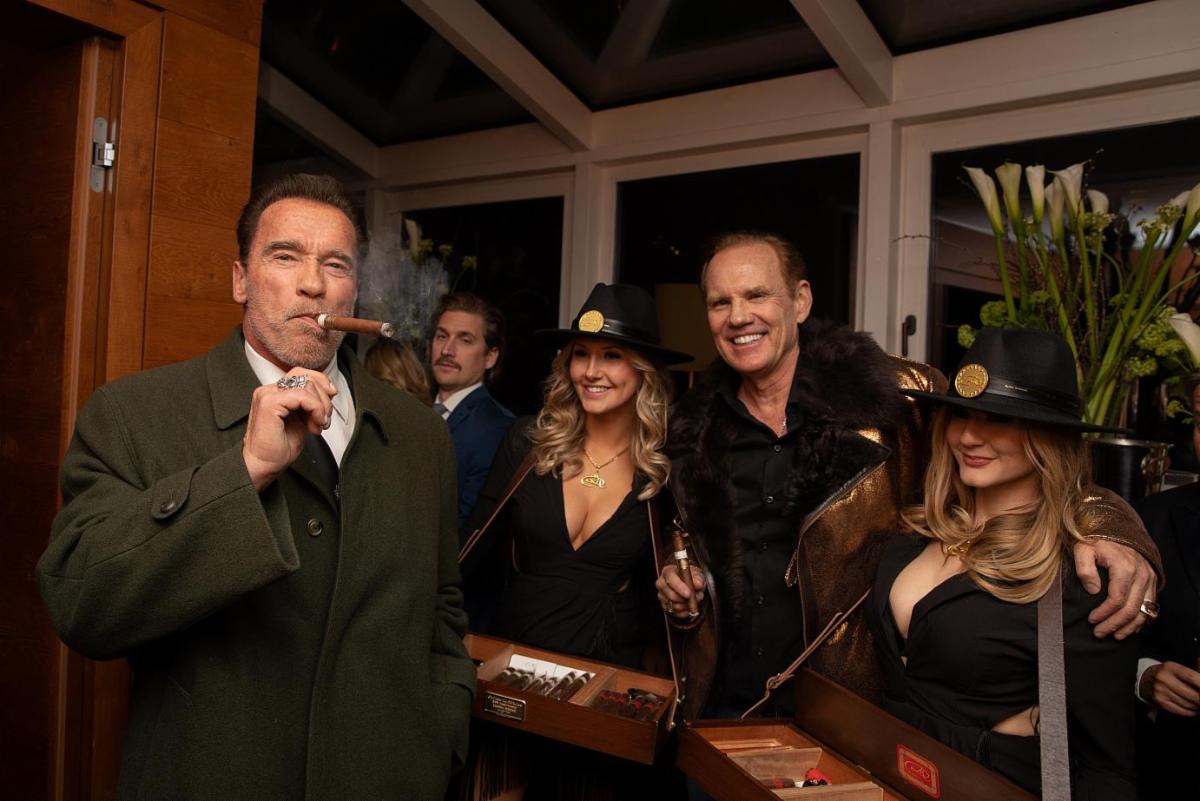 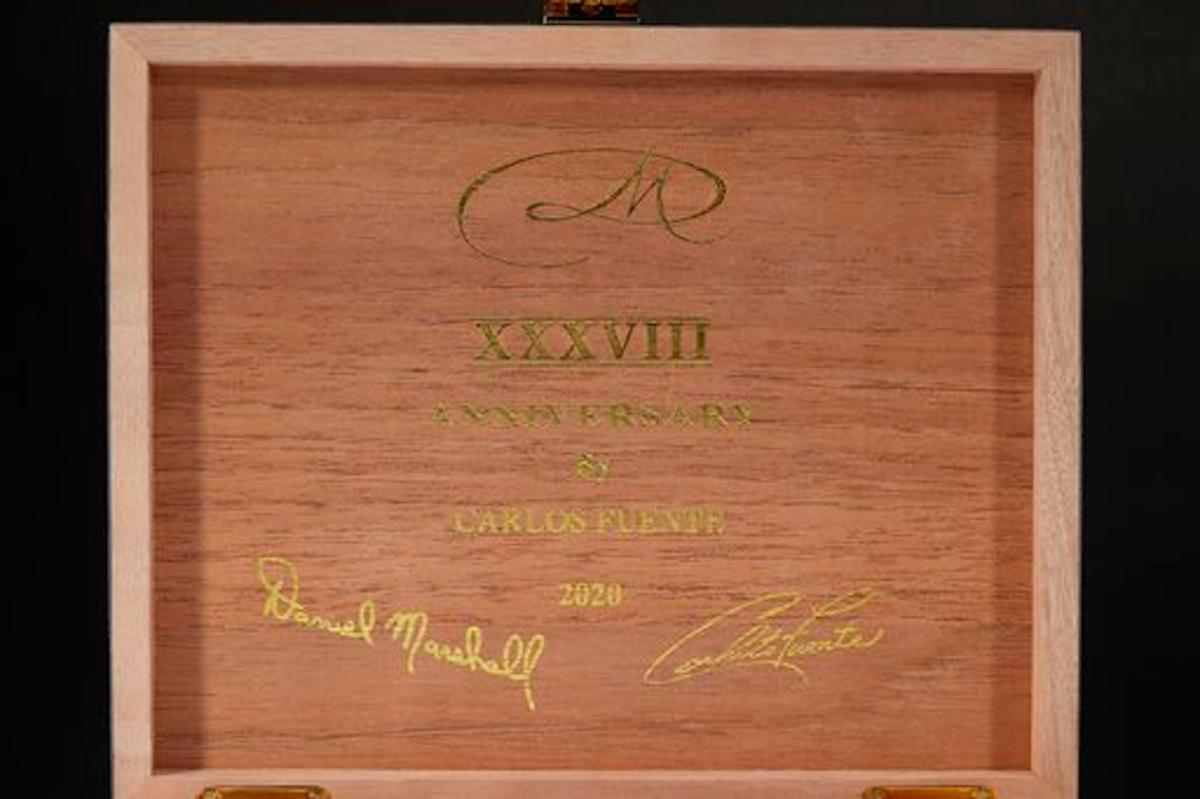 Marshall emphasized, “The DM XXXVIII by Carlos Fuente cigars are precious, they represent everything I look for in a cigar, effortless draw, rich and smooth taste, a cigar that comes alive. I told Carlos, ‘With this cigar, I am torn. Half of me wants to light it, half of me wants to eat it.” Fuente responded, “Brother, it is good enough to eat.” The super premium XXXVIII is made in one vitola, Torpedo – a classic favorite of Marshall and Fuente.The pyramid shape is treasured because the tapered head allows the complex flavors of the cigar to marry in the mouth.

In this coveted jewel, you can taste time. 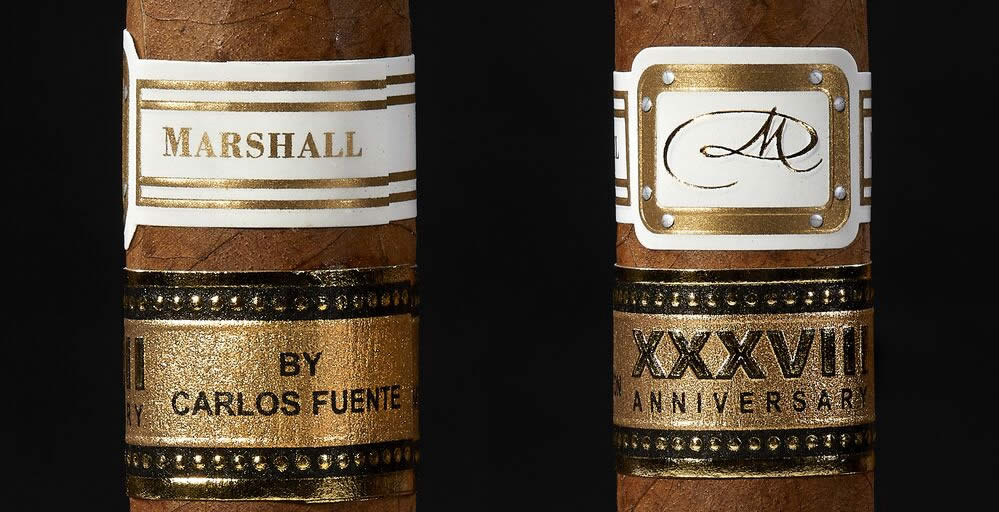 Since 1912, the Arturo Fuente Cigar Company is proud to say, “We are truly a family-run business”. Four generations and counting, the Fuente family is still loyal and devoted to the heritage and traditions that have been passed down through the years. We will continue to pride ourselves on superb quality and consistence, in order to continue making the best premium cigars in the world.

That is our code, that is our passion, that is our DNA. Fuente is the most critically acclaimed makers of hand-rolled premium cigars outside of Cuba.

The Fuente Fuente OpusX is consistently ranked as the single most sought after cigar in the world by Cigar Aficionado Magazine and know by many to be the greatest cigar in history, prized by collectors. The OpusX is wrapped in rosado leaves which are grown on the Chateau de la Fuente plantation in the Dominican Republic. Arturo Fuente OpusX Cigars are one of the rarest cigars on the market today. Known for being the cigar that all others aspire to, the Arturo Fuente OpusX Cigars use the finest premium Dominican tobacco. Each OpusX is handmade and features a one-of-a-kind Dominican wrapper that has a trademark spice to it. The vintage tobacco used throughout this rare cigar is second-to-none.

Daniel Marshall, a 38-year veteran of the cigar industry is one of the leading names in the cigar world. He is Cigar Aficionado’s No.1 rated Humidor designer and creator of the coveted 24kt Golden Cigar. DM Humidors & cigars are enjoyed in the homes and offices of countless Hollywood celebrities, US presidents, dignitaries, titans of industry, fashion designers and the most discriminating cigar lovers worldwide. Marshall is also a cigar and humidor supplier of England’s Royal Family.

Since 1982, Daniel Marshall has created and designed for the prestigious luxury gift houses Dunhill, Tiffany & Co., S.T. Dupont, Cartier, Hermes, Fred Joaillier, Harrod’s, Bally of Switzerland and Garrard’s of London. Daniel Marshall’s humidors are historic, with a collection on display at the Smithsonian Museum.

September 2017, a 1 of 1 humidor DM made for Prince Albert II of Monaco with Daniel Marshall Cigars was put on the block and raised 75,000 Euros to benefit our global oceans.

Since the opening of the Daniel Marshall Cigar Lounge in the Kitzbuhel Country Club, Austria in 2013, Daniel Marshall has been hosting elite and exclusive “Modern Day Campfire” Experiences with discriminating connoisseurs across the globe. For upcoming DM Campfires and to join the “DMCC” The Daniel Marshall Campfire Club email: [email protected]